"Drake is the only law school in the nation, at the present time, to have a computer center with both Lexis and WestLaw."
— "Happenings at Drake University Law School" in 45 News Bull. 12 (1985). (This is the pre-cursor to the Iowa Lawyer magazine published by the ISBA.)

Today it is difficult to imagine creating any edited paper or publication without a computer. As pictured below, members of the 1980-81 Drake Law Review used typewriters to prepare articles for the printer. 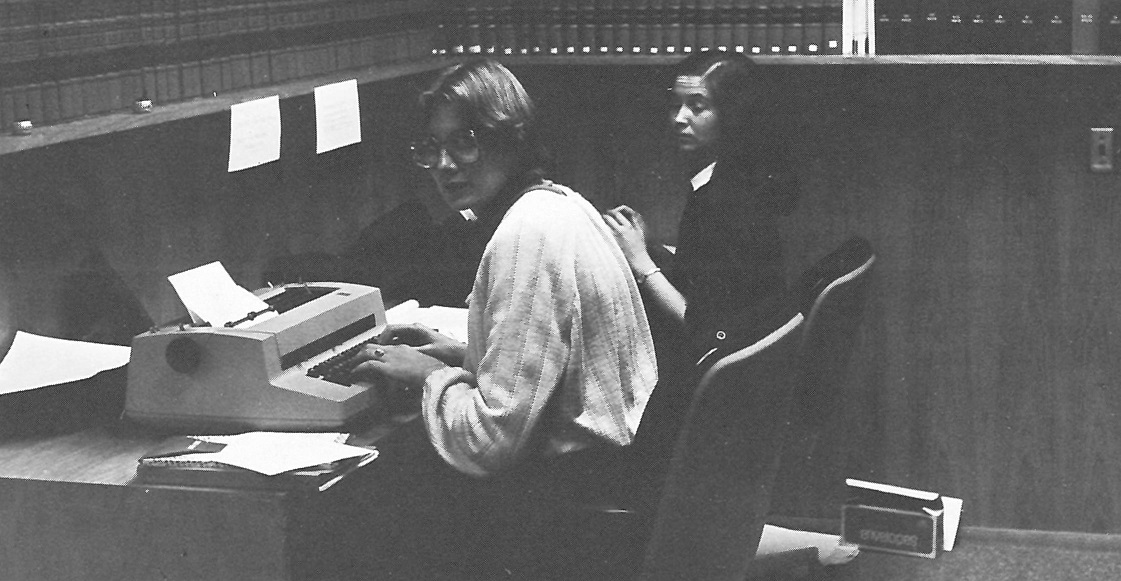 Now ubiquitous, computers were once a rarity. Consider this item from the Nov-Dec. 1970-Jan.1971 issue of the ISBA's News Bulletin: "...with information supplied by the Judicial Statistician, in cooperation with Drake University Law School and the Drake University computer, the proposed plan [for judicial district redistricting] was finally arrived at." ("Board of Governors in December Meeting" at p. 3) (emphasis added) 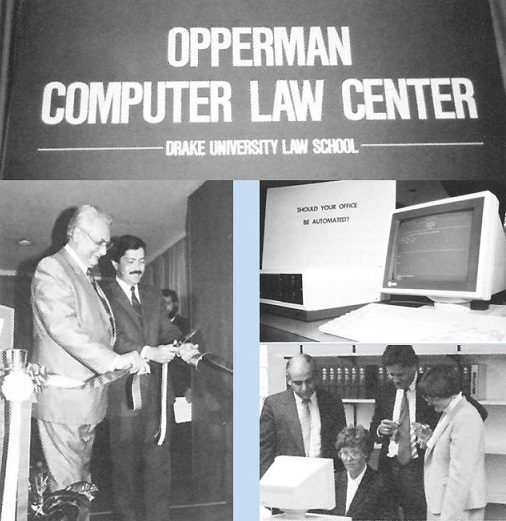 In 1985 the Opperman Computer Law Center opened at Drake Law School, as pictured above. The center included both Westlaw and Lexis research training centers (a first in the nation), as well as an AT&T Information Systems computer laboratory with 17 AT&T PC 6300 personal computers. The grand opening ceremony included a ribbon-cutting by donor Dwight Opperman (LW 1951) and Governor Terry Branstad (LW 1974). 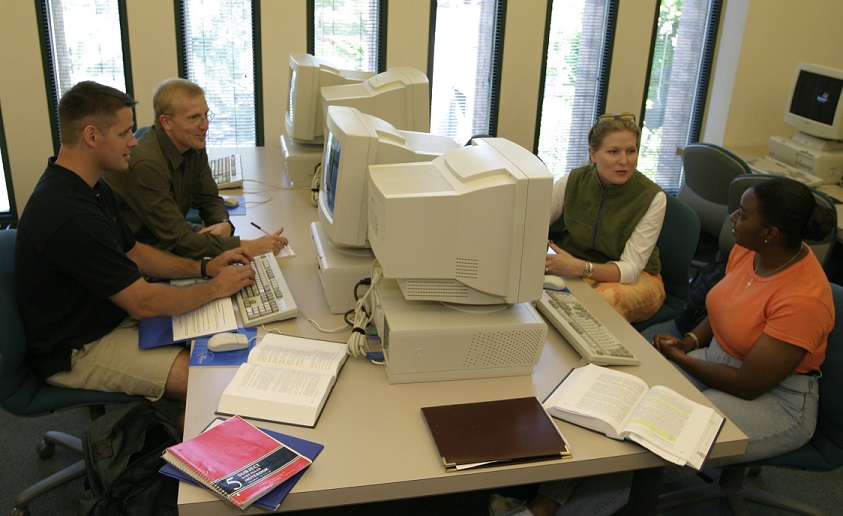 When Opperman Hall and Law Library opened in 1993, it became the home for the school's computer labs. Pictured above, students work in the Perkins Computer Classroom in 2003. At one point, the library housed four separate computer classrooms/labs, as well as other banks of computers located throughout the building. As mobile personal computing proliferated, the library consolidated its labs to two separate stations, as well as additional desktops throughout the building. 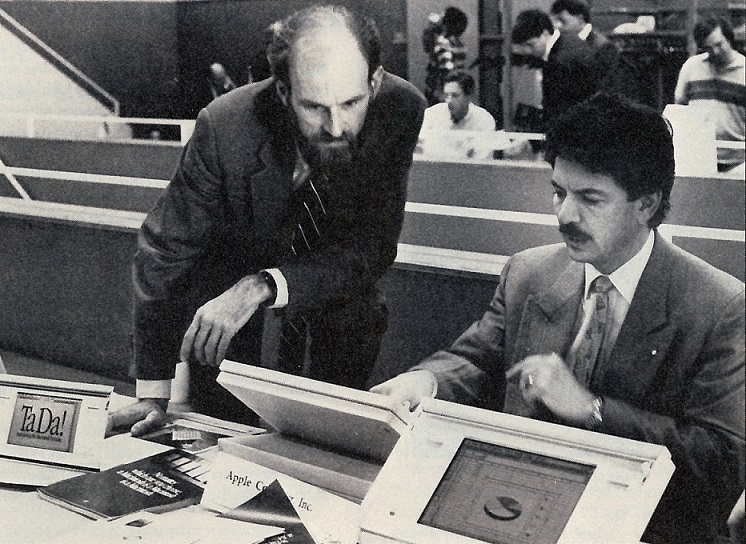 Above, the new portable Macintosh computer is shown off at Drake's 1989 computer law symposium.

Books still play an important role in legal research. However, there was a time when books and other print materials were the only players and researchers took notes long-hand. The following photo appeared in the 1955 Quax, the Drake yearbook, with the caption "Law Personified." 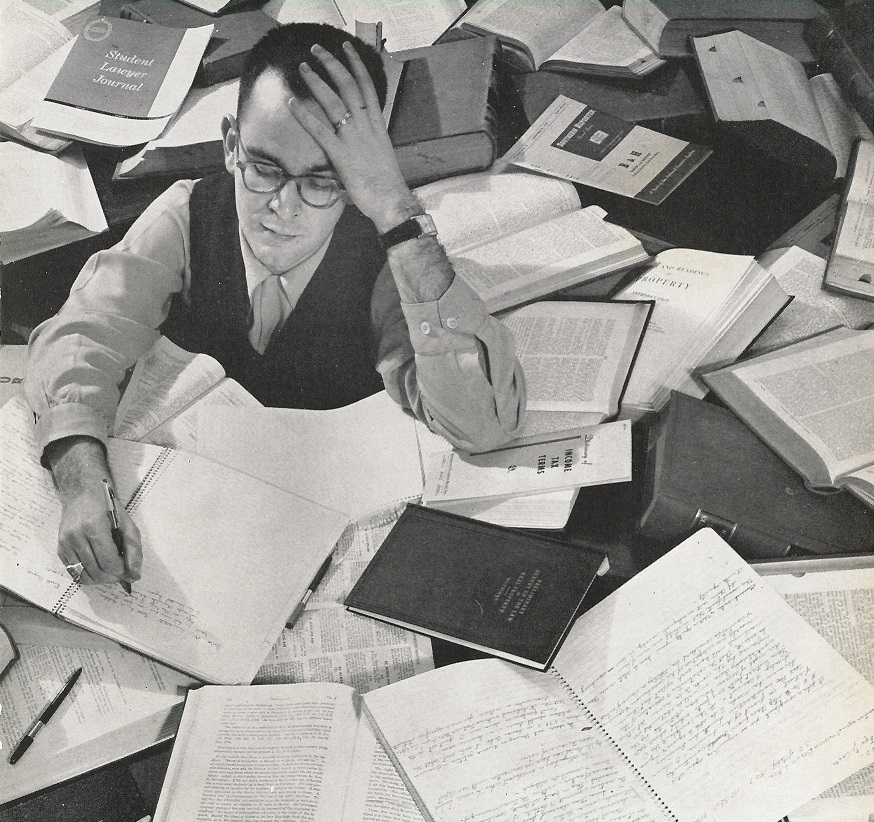 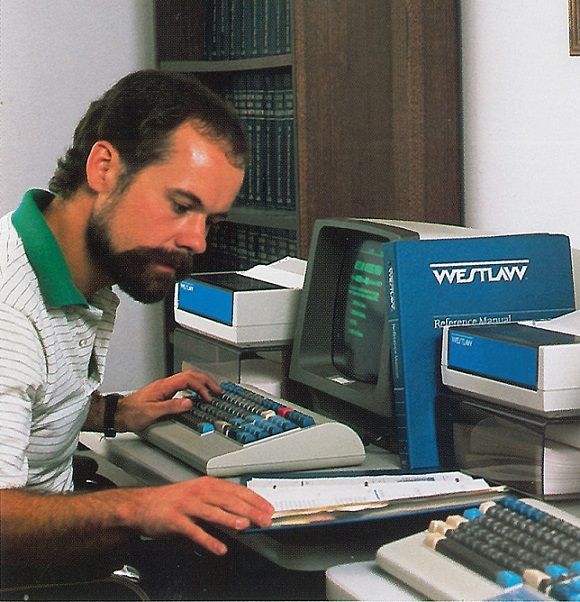 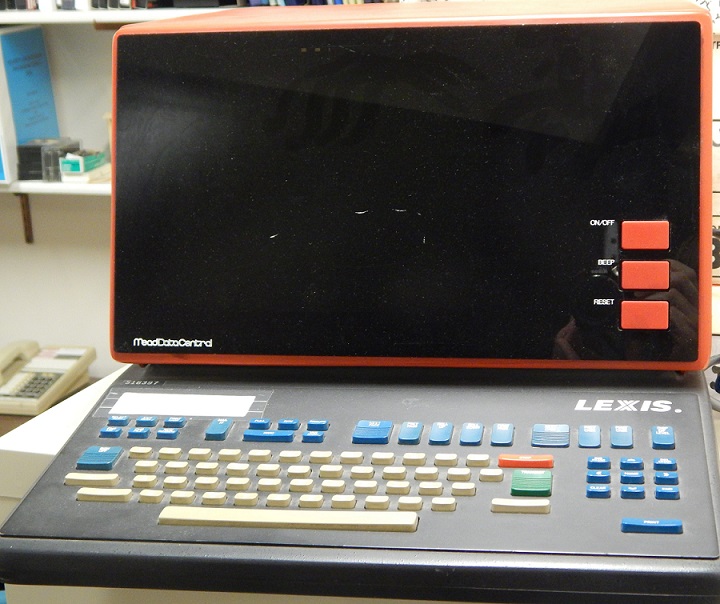 The development of the Web significantly changed online legal research. Today, in addition to web-accessible subscriptions, legal researchers also use apps to conduct research anywhere. Below, 1Ls Mary Rose Shelley (f) and Shannon Holmberg (b) use a tablet and a laptop as they study in the law library in 2015. 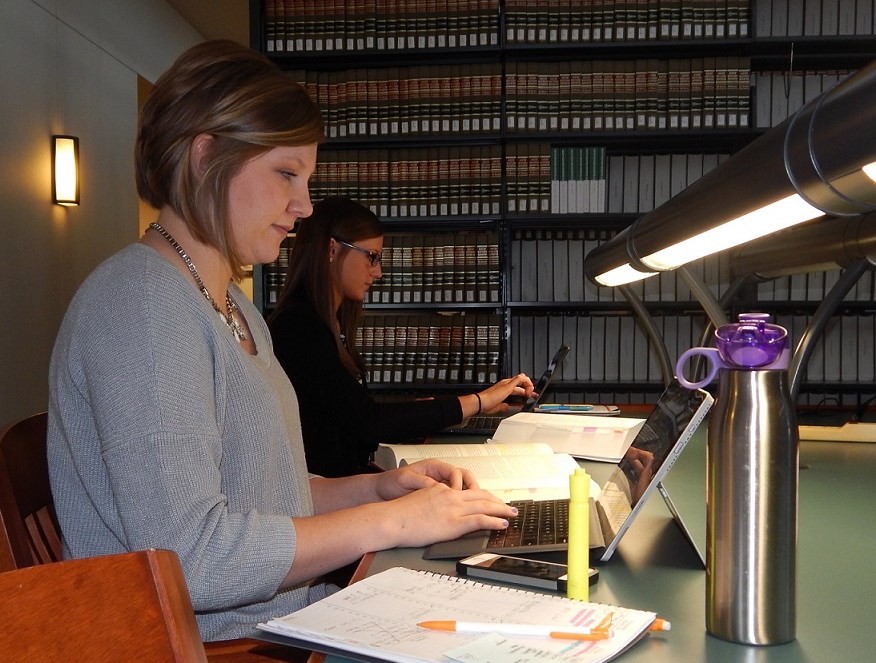 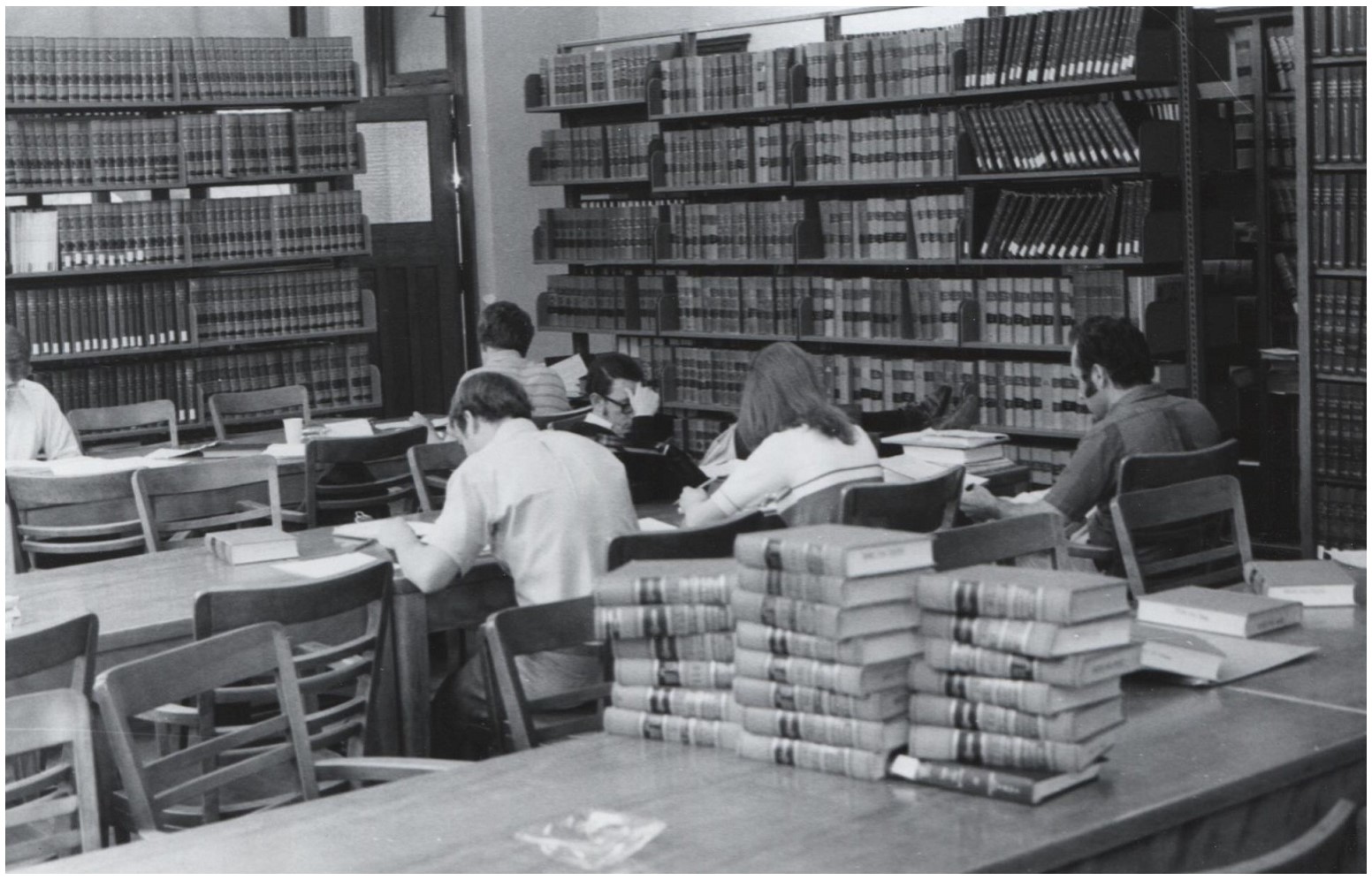 Law Library in Carnegie circa 1975 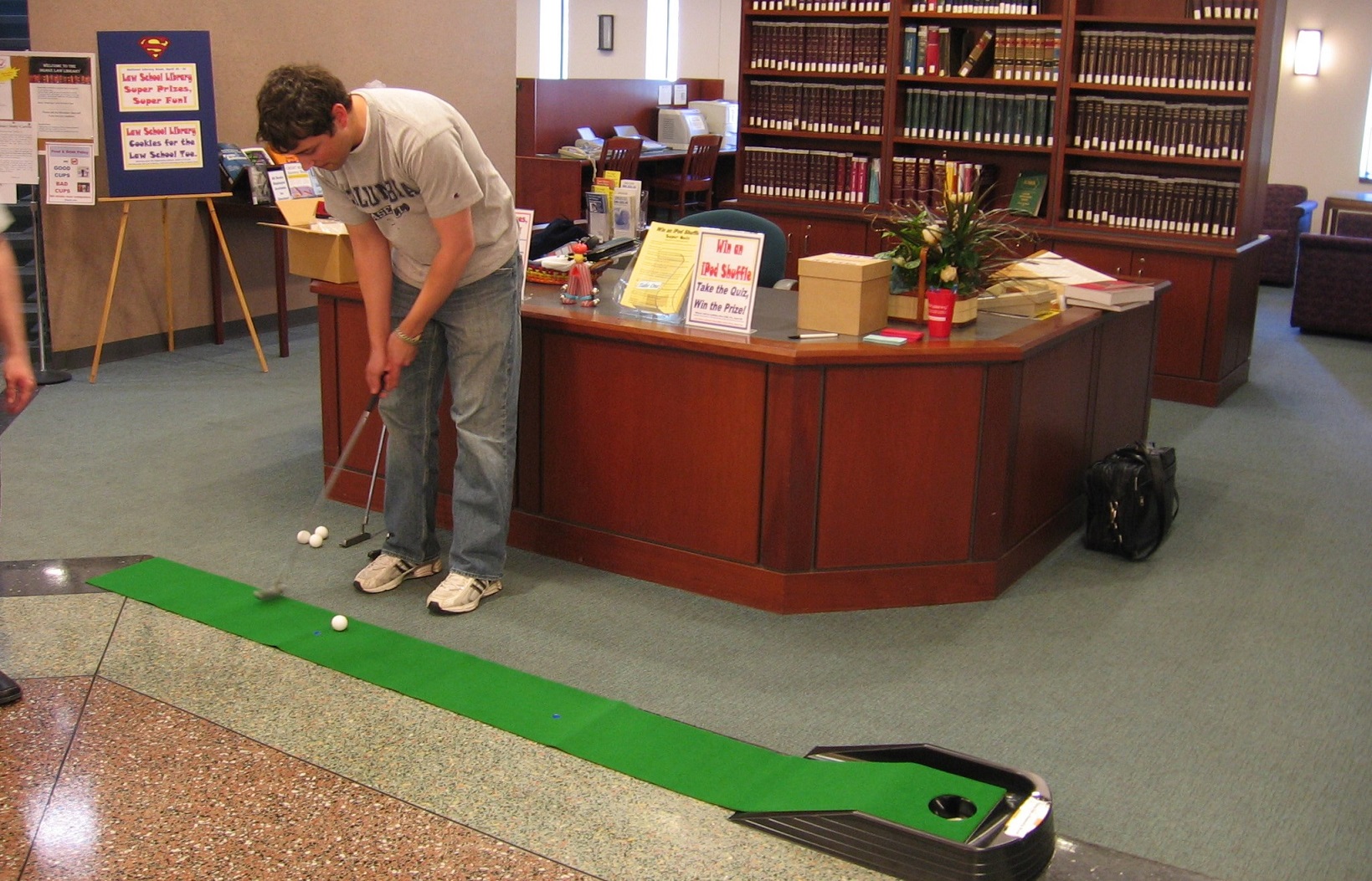 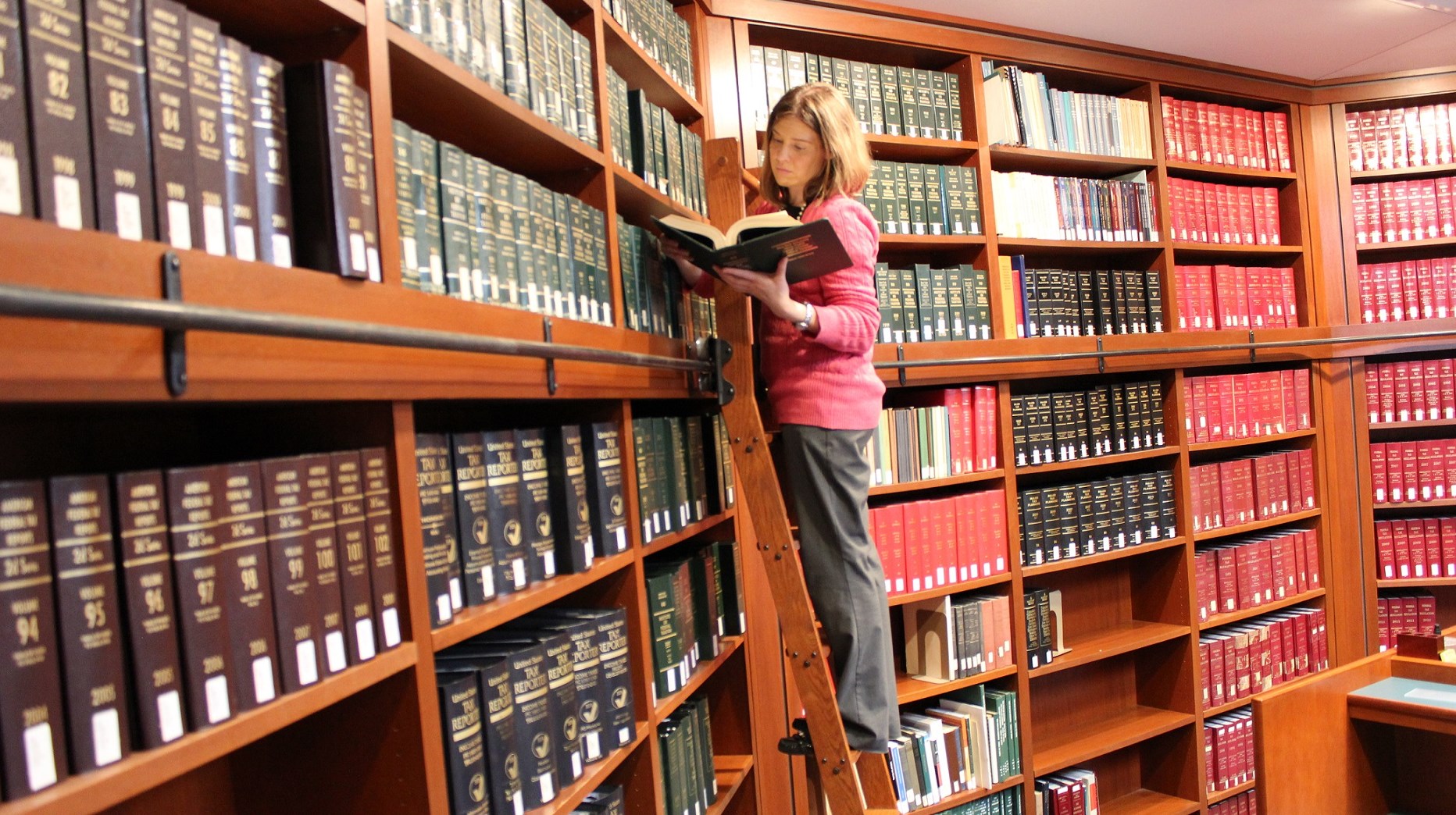